Last year, we tested out three pinterest-popular Valentine’s Day craft ideas. This year, we’re back, testing out toddler-friendly and vegan Valentine’s baking ideas from, you guessed in, pinterest.

Like so many others out there, I’m a bit pinterest-mad, and there’s nothing like a holiday/occasion board! I have a valentine’s day board that I’ve been pinning to for years, and it’s SO easy to just keep cataloguing ideas and not ever trying any of them in real life. Last year I decided that this wasn’t a useful way to spend our time, and so we’ve been making an active effort to try a handful of ideas for every possible occasion.

Since I had a day off on Friday, we had a go at some vegan valentine’s baking ideas. I chose a few that looked easy enough so that Isla could help, and we tested them for both taste and toddler-friendliness!

Ever since the dawn of aquafaba, making vegan meringues has been pretty low-effort. I saw this inspiration for pink meringue kisses, and just knew we’d have to include these! Since the recipe in question is a traditional, non-vegan one, I went with my usual meringue recipe and made it valentine’s friendly! While aquafaba meringue is a bit fragile and I’ve heard of some recipe fails when using colours and flavours, I’ve never experienced any issues. In this recipe, I used Foodie Flavours Rhubarb flavouring* as well as Sugarflair Food Colouring Paste* in Claret, and they worked perfectly.
This is quite possibly one of the easiest recipes to make with kids – they can help chuck everything in the mixer, and, with a bit of help, they can do the piping, too! 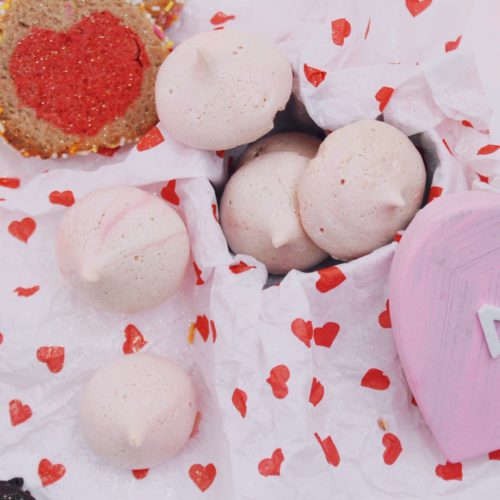 There’s literally nothing better than chocolate and peanut butter in my opinion! After seeing this inspiration, I just had to try a seasonal version of everyone’s favourite US candy. It wasn’t hard to veganise, all we had to do was swap the butter for margarine, but I did really struggle with the chocolate coating. That’s why they kind of look a mess in the photo :D. Apart from that final step, these were quite easy to make. Again, there’s lots of throwing things in the mixer, rolling out dough, and cutting out shapes involved, so it’s a really family-friendly activity!

Our final vegan valentine’s baking project was the famous slice-and-bake cookie. We used this as inspiration, but opted for an Oh She Glows Sugar Cookie recipe to add at least SOME nutritional value into this afternoon. Using a more conventional cookie recipe might have made this look a bit better, but overall I’m actually quite pleased with how they turned out. I thought the whole thing was going to be a mess, but it was quite straight forward! In fact, I think this might have been our favourite of the three, and now I’m planning to make an easter-egg version in April!

Are you doing any vegan valentine’s baking this month? If so, please do share your plans in the comments!